I Believed, Therefore I Spoke 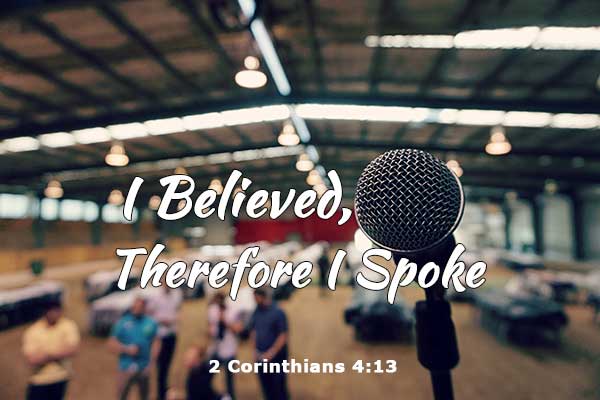 Two biblical giants said the above words. First, David sings it in Psalms 116 and later Paul draws from David’s words and confirms it in 2 Corinthians 4.

What did David and Paul believe?

Return to your rest, O my soul, For the Lord has dealt bountifully with you. For You have delivered my soul from death, My eyes from tears, And my feet from falling (Psalms 116:7,8).

In the midst of incredible danger, trouble and sorrow, David who lost all hope in men, takes flight in his spirit to a place of trust, dependence and hope before God. In that place where his spirit communicates with God and God’s ear is inclined to him (Psalms 116:1,2), David finds reason to believe in God’s salvation and speaks it into his soul. Rest, O my soul.

Paul was suffering for the gospel’s sake. He describes his physical condition as cast down and persecuted. He feels like a jar of clay that carries treasure within. His body is feeble, a vessel of very little longevity, yet carrying the savour of life unto life (2 Cor 2:16; 4:7). When people look at Paul’s life and see the great scars that he bears as a result of imprisonment, shipwreck, torture and hardship, they begin to wonder if the Apostle is actually speaking sound doctrine (2 Corinthians 4:2,3,4).

Paul says “So then death worketh in us, but life in you.” Preaching the Gospel and being an apostle meant that Paul was always at the forefront of his sheep, being exposed to elements of reproach, persecution, constant threat of death and even criticism from believers. Paul’s response is to speak out what he believes about God (2 Cor 4:13). He says “Knowing that He which raised up the Lord Jesus shall raise up us also by Jesus, and shall present us with you.” When death stares at Paul, grinning widely, Paul looks beyond his physical state and sees the unseen eternity stretching even wider before him (2 Corinthians 4:18).

I believed, therefore I spoke. Paul and David are both responding with the same words to very crushing circumstances. David says “I will walk before the LORD in the land of the living.” David’s life is a journey that the LORD watches over and in God’s sight David’s life is precious (Psalm 116:15). Both Paul and David end up giving thanks to THE God who preserves them (Psalms 116:13).

One thing is clear from the lives of these two men of God. They both believed and they both spoke. Believing in God’s faithfulness, provision, salvation will always lead to speaking it out over anything and everything we face. These words of faith, leads to songs of thanksgiving.  God has ordained our mouths with authority to manifest His will on earth. Long ago prophets believed and said there will be a Messiah. The God who orchestrates galaxies, orchestrated with precision the birth, life, death and resurrection of Christ in perfect harmony with the words of the prophets. Mathew 2:23 says “ and he came and dwelt in a city called Nazareth, that it might be fulfilled which was spoken by the prophets, “he shall be called a Nazarene.” If you believe Christ will dwell in your city, speak it out and get ready to sing that song of thanksgiving and raise that cup of salvation.