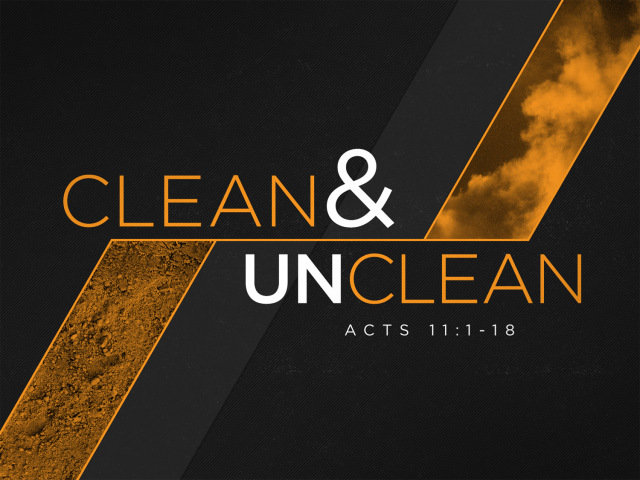 Old Testament has detailed instructions on what Israel has to follow, to be separate from all the pagans around them. In Leviticus 11:11 God clearly explains that certain creatures are not to be consumed. Lines separating clean and unclean animals were drawn based on cloven feet, the wrong kind of claws, lack of scales or fins. These lines dictated the difference between what was good for food and what was to be seen as an abomination. Carcasses were an abomination as was anything that touched the carcass. If a dead bug fell into a water pot, the pot had to be broken. If an Israelite touched a carcass, he was unclean till evening. “He who is unclean shall dwell alone; his dwelling shall be outside the camp (Leviticus 13:46).

Aeneas of Lydda had been paralysed and bedridden for eight long years and Tabitha or Dorcas of Joppa had died of illness. When Peter said “Arise” both the paralysed and the dead rose.(ACTS 9). Continuing his journey, Peter found himself hungry and he fell into a trance. He saw a great sheet filled with wild beasts, creeping things and birds in it, and he heard a voice saying “Rise, Peter, kill and eat.” Taken aback, Peter confidently exclaims “Not so Lord. I have never eaten anything common or unclean.” The voice said “What God has cleaned you must not call common..”(Acts 10:10-16). As we read ahead we see that the vision was God’s way of explaining to Peter that the gospel is for the gentiles as well. Peter the Jew, who religiously kept himself in the right side of the “clean-unclean” line had to go into the house of a Gentile and splendidly announces “You know how unlawful it is for a Jewish man to keep company with or go to one of another nation. But God has shown me that I should not call any man common or unclean.” Then he finds out that the Gospel is for the gentiles as well. The messiah was for the whole world, for all people on either side of that ancient line drawn between clean and unclean.

After raising the dead and healing the paralysed, Peter must have been highly respected or accepted among his Jewish peers. Almost at the height of this fame, God demands Peter to do this scandalous thing. His Jewish peers were incredulous “You went to uncircumcised men and ate with them!?” Poor Peter replies almost helplessly “If God gives them the same Gift He gave us who believed in Christ… Who was I, that I could withstand God?(Acts 11:17)” The outcome of Peter following the direction of the Holy Spirit, instead of the long established culture, was that we too could have Life in Christ.

Culture can be defined as the way of life, general customs and beliefs of a particular people at a particular time. It encompasses how we treat each other, how we behave, what we believe is conventional. But our God refuses to be confined by the culture that was born as a result of the fall.

In Mathew 100:34-39 we see Jesus declaring,  “Do not think that I came to bring peace on earth. I did not come to bring peace but a sword. 35 For I have come to ‘set a man against his father, a daughter against her mother, and a daughter-in-law against her mother-in-law’; and ‘a man’s enemies will be those of his own household.” This is because what He offered was a free gift, not purchased by our works, but by His blood. That message was so challenging even John the Baptist asked-“Should we wait for another?” The Ministry of Christ was, for sure contrary, to common expectations.

Everything we have been conditioned to believe in or behave as – God will challenge that. He is an Almighty and fearsome God who chose to be called “Abba, Father.” He is an unconventional God who gives unconditional love. He created the planets and stars but He chose to put His glory in Adam, His image in Man.

If we want to walk with God it will cost us everything. Everything the world counts as valuable, valid and required, will no longer be important. To be remade by God requires an unmaking of our mind sets, our ways of life and behaviour.

In Mathew 15 we witness Christ saying “And in vain they worship Me,
Teaching as doctrines the commandments of men… Not what goes into the mouth defiles a man; but what comes out of the mouth, this defiles a man.” Then His disciples came and said to Him, “Do You know that the Pharisees were offended when they heard this saying?”

In verse 15, Peter asks Jesus to explain. Jesus explains that it is when out of the heart proceed evil thoughts, murders, adulteries, fornications, thefts, false witness, blasphemies that people are defiled. It took Peter a long time to finally understand what Jesus meant.

Christianity is not a culture or a religion that follows man-made parameters. It’s not about fitting in or compromising truth to be accepted by the world. It is not about making friends and getting attention. It is about being ready to step across hypocritical lines when God calls for it. It is about being ready to trust in Him even when it may seem foolish to your friends and family. It is about challenging the religious status quo that says “I am better than you because of what I have accomplished.” It is a walk with God where the only way is Christ. 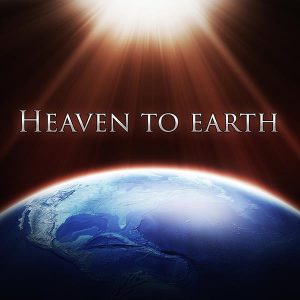 Days of heaven on Earth

God has a dream for His people. This dream has been alive since Eden. Even after the fall, even after Abrahams days were long gone, Even after the first stone tablets were broken by Moses due to Israel’s idolatry, God kept His dream alive. And he shared His dream with His people when He declared “That your days may be multiplied, and the days of your children, in the land which the Lord swore unto your fathers to give them, as the DAYS OF HEAVEN ON THE EARTH. (Deuteronomy 11:21)”

2 Corinthians 6:16 says “What agreement is there between the temple of God and idols? For we are the temple of the living God. As God has said:

“I will live with them
and walk among them,
and I will be their God,
and they will be my people.”

People who live experiencing heaven on earth will have no business with the modern day versions of idols which range from social media addiction, ungodly relationships and habits. It’s that simple. Taste of heaven to discern the difference between the baser pleasures the world has to offer and the better joys at Gods right hand. God chose to accept those who believe in Christ to be consecrated as His abode so that he may walk among us and live with us.

In Acts 27:13-25 A ship headed to Creta is experiencing a storm at sea that they lose all hope. With no food no light no direction the people on board have been in peril for days. While the rest of the people with Paul are without hope, fearing death at sea, Paul is busy experiencing Heaven’s angel declaring to Him that no harm will come to anyone on board.  So Paul, a prisoner on the ship stands tall and tells all two hundred and seventy six passengers to “take courage! For I believe God. It will be just as he said.(Acts:27:25)” Paul declares the nature of God’s word and promises in the middle of impossible circumstances because he found he could taste of heaven no matter what he faced.

Paul says, “That is why I am suffering here in prison. But I am not ashamed of it, for I know the one in whom I trust, and I am sure that he is able to guard what I have entrusted to him until the day of his return.” (Timothy 1:12). You may be facing a violent storm that rocks your boat, the enemy feel like a lion roaring into your face, the weapons against you may appear Formidable!

BUT KNOW YOUR GOD IN THE MIDST OF ALL THE TROUBLE. THE SPIRIT DWELLS In you so that you May SPEAK THE WORD OF GOD OVER YOUR CIRCUMSTANCES. And that’s how the people of God birth days of heaven on earth! 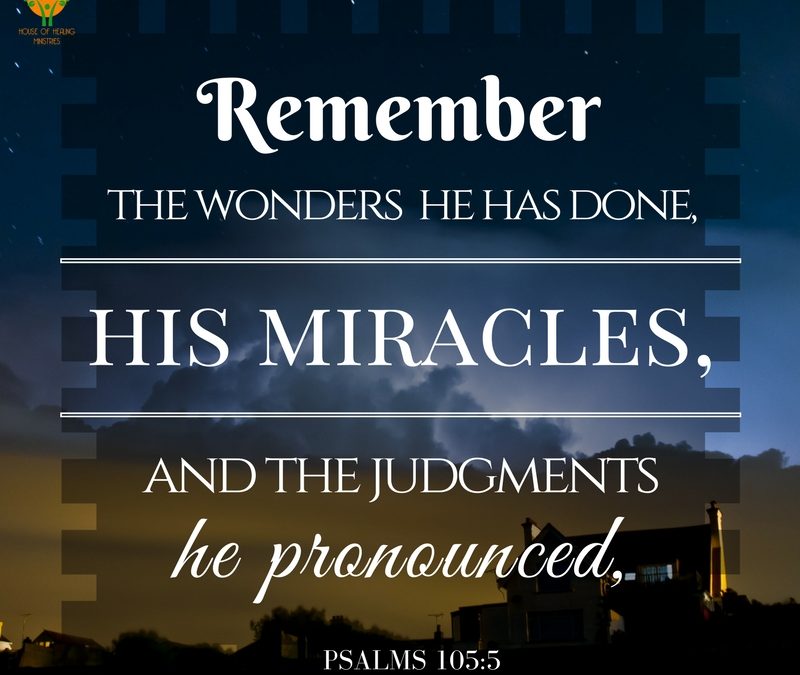 Remembering Gods Grace Through Your Ages

Today while taking a break at work, I was googling the word “remember” and I came across this definition.

“Remember – To bring to one’s mind an awareness of someone/something from the past!”

As terrible as the past we might have had, we often forget that our past was abundant in God’s grace too. If only we could remind ourselves and evoke each day the memories of God’s grace! Then over our lives, our souls will be steadfast and our hearts secure!

The Psalmist says in Psalm 77:11, 12 I shall remember the deeds of the Lord, surely I will remember your wonders of Old. I will meditate on all your work & muse on your deeds.

1 Chronicles 16:15 says Remember his covenant forever, the word which he commanded to a thousand generations.

Can we make a decision today to take time out to remember His wonders and covenant towards us?

As we remember His work and His word in our lives, it will ignite strength in our bones and passion in our hearts. You might be on the verge of giving up but if you can remember His word and His works for you like Elijah you will rise up and destroy the same Jezebel who is troubling you today! 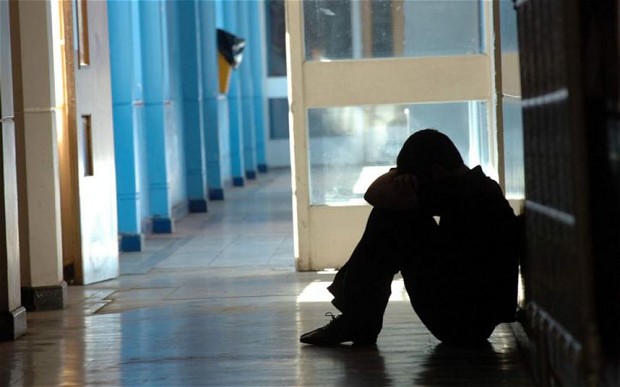 Should I Give Up?

I wrote this piece when I was going through a rough time in my life, a season of discouragement. All I saw around me were unfulfilled promises of heaven. The enemy was asking me to give up. It was at a time like this that the Lord reminded me of Hannah. END_OF_DOCUMENT_TOKEN_TO_BE_REPLACED